Erika Christensen, Scene Study student at The Acting Center is starring in NBC’s new one-hour drama “Parenthood” inspired by the box-office hit of the same name.

In this clip, Erika Christensen (Julia) explains that the core of the Braverman family is love and sometimes brutal honesty.

The Acting Center’s Cupid’s Night Out was performed to a once again standing room only crowd! The packed crowd at The Acting Center Theater enjoyed an evening of scenes, monologues and poetry in celebration of St. Valentine’s day. Acting Center scene study and improv students and teachers regularly perform for the public. Keep watching for our next performance!

Our student, David Paladino, just booked a voice over for a video game. Cool!

The Acting Center is Number One!

The Acting Center is proud to be included in the new iPhone app—Actor Genie. This clever application has a host of vital information for actors all for less than the cost of a movie ticket. You can see what projects are being cast and what casting directors are doing the casting! There is insider advice from industry leaders—actors, directors, producers and more. But what we are most excited about is they have a list of Top 10 Picks. In this section, they have the top ten acting schools in Los Angeles and guess who is at the top of the list? Did you guess yet? The Acting Center, that’s who! Now you have to check us out! Our next Orientation Lecture is on Feb 15th at 7pm. Hope to see you there.

Katie Dean here. I am a student and teacher at The Acting Center and have been attending this magnificent place for over 2 years.

I’m very proud to announce that a web series called Dick & Jane, which I’m producing and acting in, has premiered it’s first episode on YouTube and has had over 45,000 hits!!! Thanks to the ingenious writing and directing of Elvis Winterbottom (also another Acting Center Student) we’ve got a great show on our hands.

Dick and Jane is a very fun show revolving around the lives of the two quirky yet interesting characters who seem to be stuck in the 1960’s and have a vicious rivalry with their neighbors; mostly due to one-upping them in cooking and who has the most expensive smoking pipes. I’d try to explain what the first episode is about but honestly you’d probably just be confused. So my suggestion is that you watch it, have some laughs, spread it to friends and make sure to subscribe to the show so you can be informed every time we put up a new episode! 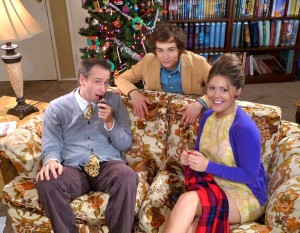 A dynamic duo from NYC calling themselves “The Misunderstoods” have walked away with the First Place prize of $5,000 dollars in Smule’s “On A Boat” video contest featuring their I Am T-Pain app created for iPhone. We’re proud that half of the Misunderstood duo is Acting Center student Michael Covino!

In addition to the cash, the duo have been awarded the highly coveted “Big Ass Chain” that will immediately elevate them to epic status in New York.

Congratulations to the fresh new faces of iPhone royalty for 2010. Expect to see these two performing their underground hit on Saturday Night Live sooner than later. Yep!

Check out some more press Gizmodo, theiphoneblog.com, The “I Am T-Pain” Contest Website 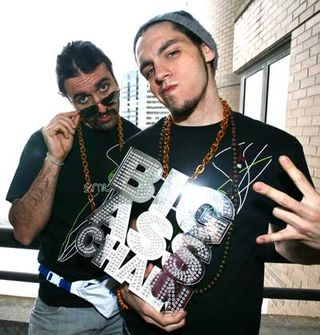 Our student, Michael Covino, was the week nine winner of Smule’s “I Am T-Pain” Contest. Michael and his brother, Christiano, directed and starred in this very funny video in NYC. They are in the running to win $5000 and one Big Ass Chain! Check out the video and show him some love: