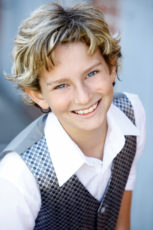 At 10 years old and already with a career on the rise, Barrett Epstein started performing in school variety shows as a solo performer.  His first professional part was on the reality re-creation show, I Didn’t Know I Was Pregnant.

An adventurous kid with lots of energy, he expanded his skills by singing, dancing, acting in musical summer repertory and has also earned his red double stripe belt in Taekwondo!

Barrett completed his first film role in 2017, Night Rain (a psychological thriller), has also appeared on national commercials and is now starting to model. He will be releasing his first music video later this year.

Q) You have been studying at The Acting Center for a while now. What do you enjoy the most about the class?

A) Yes, I have been there for two sessions now and I always leave happy and joyful because I got to be an actor for two hours. The class has also helped me focus my energy to who I am in the character. A bonus is, I can now really memorize lines fast and I know that I am a professional. Before it was hard to memorize 3 pages and now I memorize 10 pages , easy peasy. There is no script or character I can not tackle. It is sooo much fun to study with Taylor too.

Q) What have you learned from The Acting Center that you use in auditions and on set?

A) Sooo much! How to look at a character and what they do, how to understand the lines I am saying and how to make this true to me. I know what is real now and before I think I was just doing line readings. No more. I get how to be the person!

Q) What is the most valuable thing you have discovered at The Acting Center?

A)How to play. I am kid and play is important but I didn’t realize that play is what acting is about. Now I have fun. I know my character, I know my lines and I am not nervous. Before I got a bit nervous, not now. I also walk in and I CAN TELL if I did good in an audition. I don’t have to wait for them to tell me. I know. You know?

Q) What would you say to other young actors looking for a great class?

A) This class really helped me. They are VERY nice and you play as an actor but you learn too. You learn to get better and know what a character is. The first session I started with Taylor, I started booking. The second session, I booked three jobs. The third session, I don’t know what will happen but it will be great!  Also we do these fun showcases so people can see us act. This is a REAL acting class! I AM AN ACTOR! 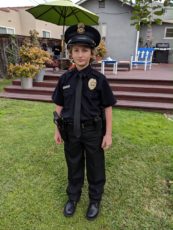